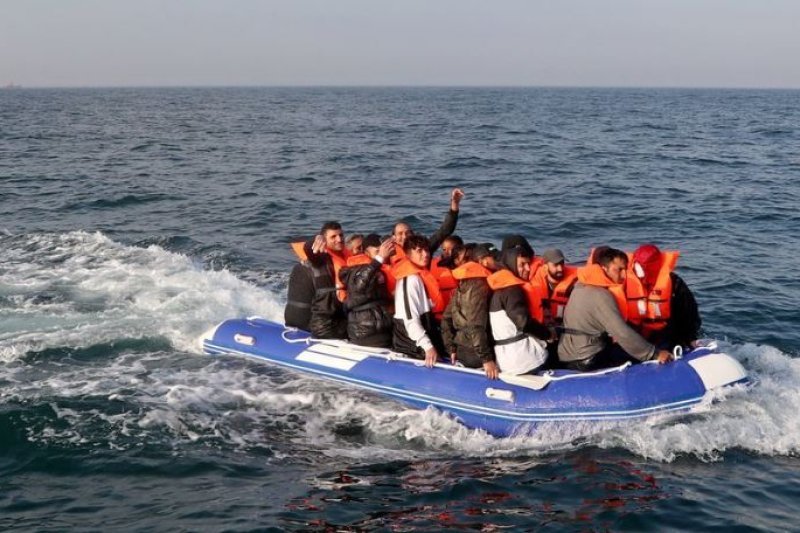 The exodus began Monday evening. Coaches carrying migrants have started to leave the main asylum processing center in the Channel, to be dispersed in hotels and guesthouses across the UK.

Their nightmarish ordeal ended for them, ironically enough, on Halloween.

Authorities had hastily put in place plans to move 2,400 migrants from the Kent facility over the next fortnight in a bid to rapidly reduce dangerous overcrowding.

For a detention center that was supposed to house 1,600 migrants but ended up holding more than 4,000 people, conditions worsened after a petrol bomb attack on a detention center in Dover on Sunday forced authorities to transport 700 other asylum seekers in Manston.

In Parliament, Suella Braverman announced that authorities were buying 1,800 “additional hotel bed places” in 13 “new hotels” to reduce overcrowding at a center that is only supposed to process migrants in 48 hours, and no keep them there for weeks. time. It is claimed that some children and their families had been there for a month.

The embattled home secretary had been accused of ignoring the issue, hoping to dissuade thousands of migrants – mostly men and many of them from Albania – from making the journey to Britain. Their preferred route is now said to be economy flights from the capital Tirana to Belgium and then from the coast by boat to the UK.

Providing Albanians illegally entering the UK with bed and full board in British hotels may not be the policy solution Ms Braverman seeks. Albanians are now thought to make up 60% of migrants crossing the Channel, with as many as 7,000 believed to have arrived in small boats so far this year.

They are trafficked here to work on cannabis farms by criminal gangs. According to some reports, people relocated to hotels simply go out in a few days to work in said farms, in empty houses and warehouses.

Inside Manston, tensions would increase as time passed. According to the ISU union, which represents border and immigration officials, conditions remained “really dire” with just 180 camp beds and thousands of people forced to sleep either on hard floors or on the ground in tents.

“The conditions are really awful, really unpleasant and bear in mind that the site was only designed initially for 800 people,” she said. “It is only legal to hold them for less than 24 hours. Anything beyond that is arguably illegal detention.

“There are not enough beds. There are 180 beds and they are just cots – foldaway cots. Everyone sleeps on gym mats on the floor. There is nowhere to wash your clothes, all sanitary facilities are Portaloos, [and] cleaners can’t get in, so it hasn’t been cleaned properly for nearly six weeks.

“No wonder the disease is rampant. Whenever you round up people who come out of a less than healthy living situation, you’re going to get things like fleas, sand fleas, and scabies.

The UK, she said, had effectively created a “new Sangatte” in reference to the ad hoc camp built outside Calais for migrants trying to reach Britain.

The cost, she added, of running Manston had soared to £7million a day – a figure the Home Office disputed.

The ISU said fighting broke out regularly, with migrants promised by their traffickers to a “land of milk and honey” discovering the grim reality of life in Britain. Ms Moreton claimed toys were given to children and a tin can one of them entered was used as a weapon by a grown man in an attack on another.

“We handed out a set of toys to the kids and within an hour one of the toys had been weaponized and used on someone,” she said.

Ms. Braverman was in the sights of the deputies. A source close to Priti Patel, her predecessor, said: “There was never any overcrowding when she was there. What would happen is if people were worried about the terms, we would sign more hotels.

Another Whitehall source said Ms Braverman had been ‘warned and warned this was coming’ but had ‘let this backlog build up rather than act’.

However, ministers now plan to withdraw 400 migrants a day from Manston with immediate effect, with the aim of at least halving the number of people in the camp within a week.

“We’ll get the majority of people off the site within a week or two. This will allow it to operate at an acceptable level,” a government source said.

“It’s austere, but I feel like it would work well if there were a lot fewer people. The problem is the large number of people who have arrived and we have not been able to move them to other accommodations.

“We are trying to improve conditions with proper medical support, better food, more staff and I think some of those things are already in place, like medical care.”

Through a space in a tarp that surrounds the camp, a collection of sweaters, other clothing and towels were visible hanging from the metal fence.

Meanwhile, children were throwing a football at each other on a tennis court, which had become a makeshift playground. A boy in a purple sweater looked amusedly up at the sky as a press helicopter flew over the center, breaking up the day’s boredom.

Lorries drove in and out – the daily food budget is said to be £15 a day – while police patrolled the area in marked cars to keep migrants inside and, given the bombing gasoline at Dover, the intruders.

In the local neighborhood, there are fears of an outbreak of violence and riots if the situation escalates.

A spokesman for the nearby RAF museum, which houses a valuable Spitfire among the collection, told the Telegraph: ‘We remain neutral but any decline in circumstances there would cause us to fear for the safety of our volunteers, many of whom are seniors and our building, because we have two invaluable planes there.

A resident said he had recently seen two migrants wearing tracksuit bottoms and flip flops running away from Manston and walking towards a nearby McDonald’s, where one was apprehended by a citizen’s arrest while the other fled. The local declined to be identified for fear of repercussions.

Another claimed an Albanian entered a nearby house with the door open and demanded to use “the old man’s phone to call a taxi to Manchester or London”.

A woman, who lives nearby, became increasingly worried and surprised that the government did not act sooner.

She said, “I’m realistic. If the Home Office wanted to do something about it, it would. You saw how quickly the government set up the Nightingales [temporary Covid hospitals]. But everyone thinks ‘Oh it’s just Manston, so that’s fine. We can bring them here”.