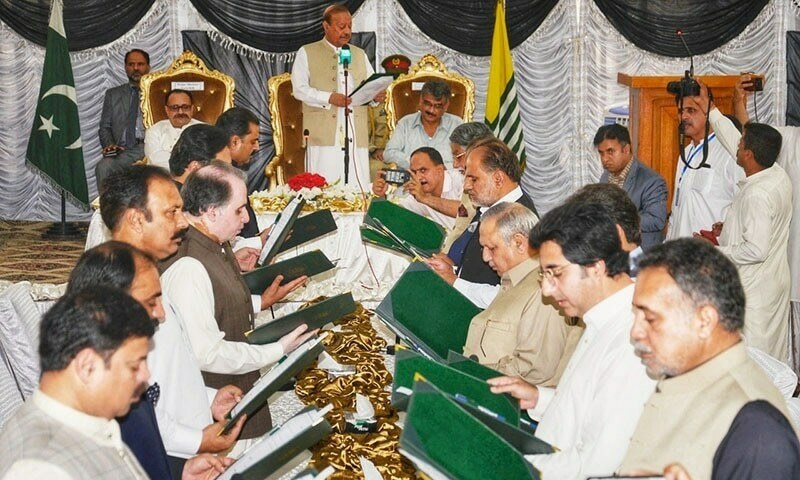 A meeting of Azad Jammu and Kashmir cabinet members and parliamentary secretaries decided on Sunday not to present the 2022-23 budget in the event of cuts by Islamabad to the region’s budget allocations.

Chaired by Prime Minister Sardar Tanveer Ilyas, the meeting brought together 13 out of 16 ministers, three out of four advisers and special assistants and three out of five parliamentary secretaries.

The Speaker of the Legislative Assembly, Chaudhry Anwarul Haq, who has served as the Acting Speaker of Azad Kashmir these days, was also present.

The meeting set up a 12-member committee to take opposition inside and outside the assembly on board on the issue of budget cuts.

Two other committees have also been formed to raise concerns about it on traditional and social media.

According to an official press release, Prime Minister Ilyas regretted that the federal government imposed budget cuts on the territories of AJK and Gilgit-Baltistan, both ruled by the PTI.

“This territory (AJK) is not only the base camp of [Kashmir’s] liberation but also strategically important given India’s aggression on the Line of Control… It cannot afford budget cuts,” he told the meeting.

“We will inform the Pakistani government about the sensitive nature of the region as well as the situation resulting from the budget cuts,” he added.

Haq said the budget cuts would leave a “negative impact” on the region.

According to the press release, the ministers maintained that the Kashmiris had already made sacrifices for Pakistan and that “if Pakistan still needed their offerings, the federal government could stop their entire budget.”

The meeting decided to raise its voice in unison on the issue of budget cuts, the press release said.

While talking to Dawnhe indicated that the government of the AJK had been asked to prepare the development budget for the next fiscal year to the tune of Rs 29 billion.

“However, at the same time, we were asked not only to pay the bills for the projects previously directly sponsored by the Federal Government, but also to pay the salaries of the employees of the foreign-funded projects from Rs 29 billion. “

Already, he said, the federal government had cut the current year’s development budget by Rs 5.2 billion and since most of the development work above that amount had been done, this burden would also be transferred to next year’s meager allocation.

“In the context of this situation, we will be practically left with barely 8-9 billion rupees in the development budget for the next financial year, therefore the parliamentary party is unanimous that the preparation of the budget is practically impossible. “, did he declare.